To learn more about the daily routine of our students at the State University of New York. Check out the interview with our alumni João, who participated in the January 2020 class.

Which course did you choose? How was your first day?

I took the Strategic Thinking course. The first contact with the program I can divide into two parts, Sunday and Monday. On Sunday we went to the university to take a tour, to know where the classes would be, the cafeteria, the underground tunnels (for the students to walk around campus when it snows), and everything. The second day, which was in the classroom, was more of a presentation of what would be done in the course and what would be discussed throughout it. We had lunch with the director of the university and those responsible for the courses. That was a day for adaptation, both to the language and to the university

How was your routine during college days? And, on the weekend?

Funny to think that a routine was created so fast and in a such short time (only 3 weeks), but it was basically going to the morning’s class (Strategic Thinking), having lunch at university, and going to the afternoon’s class (Business English). After class, I would go to the mall or Walmart to buy something to eat. Albany is not a big city, even though it is the capital of the state of New York, it didn’t have many options near the college and hotel to eat. Arriving at the hotel (where most of the students were) we discussed and worked on the projects that were supposed to be delivered in the last week of the course, in addition to studying for the next day’s class.

The weekends were the days to visit the surrounding regions or even get to know the small but full of history, Albany. Which was what I did on my first weekend in the city, I visited several museums, parks, and the New York State Capitol as well. (photo attached).

The second weekend I went to New York City, where there is a lot to do. I walked through Central Park, visited the American Museum of Natural History, watched an NBA game, Aladdin’s Broadway show, and visited several famous tourist spots.

Besides that, Albany is very close to several cities, and within a few hours of travel, you can go to many places (Philadelphia, Washington, NY, Canada, Boston, Chicago). For those who want something more active, there are some mountains nearby that you can ski.

Why did you choose to study at the State University of New York? What was your favorite thing at university?

The choice for SUNY (State University of New York) happened due to the advertisement made on the Facebook group of UTFPR (Federal Technological University of Paraná), where I study. I didn’t even know that courses were offered elsewhere, but NY is a place that everybody wants to visit.

Regarding SUNY, for sure what I liked most was the infrastructure. A gigantic place, full of tunnels to protect itself from the snow and to be able to move through the various blocks.

The professors I had were super available and communicative, willing to answer questions, advise tours, and even had donuts in class for students. The classes, as I said above, were very participatory, in the course I took, we had to study cases from several companies and discuss about them in class, taking into account the students and professors. An interesting didactic, which has been improved with student feedback.

We also had two papers to be presented at the end of the course. The first was from the Strategic Thinking classes, in which we made a general analysis of a company, how it behaves in the market, its profits, marketing strategies, and much more. The second assignment was for all students, regardless of the course, where we should create something innovative and try to sell this idea, how it would work, the costs to make it real, how it would help others, etc…

How was the graduation day?

Every effort was made to arrive on the day of getting the diploma and graduation. The ceremony was at lunchtime, we even had lunch in the hall to celebrate. It was a simple ceremony, broadcast on Facebook for our family and friends to follow online. The pre-graduation was remarkable, I remember that we were afraid to walk in the snow, women were afraid to fall. It was a very funny day, in which I celebrated my graduation with people whose names I didn’t even know 3 weeks ago and now we were friends.

At the end of that experience, what do you believe was the most remarkable for you in the professional field? And what about the personal perspective?

In the professional field, it was a beautiful experience: being able to practice English at a high level, having to make a serious presentation and a lot of research, in addition to opening my eyes to a lot of the business world.

On a personal level, it was certainly the friends I made, it was one of the best parts of the trip. People from various regions from Brazil and Argentina. People I keep in touch with, it was a pleasure to meet them!

Thanks for the interview and the records of your international experience, João! May you be very successful in your professional life.

And if you are reading this post and want to have a similar experience that João had, click here and learn more about the courses available at the State University of New York! Studying for three weeks in New York, having contact with students from different countries, Ph.D. professors, as well as visiting companies in the region will provide you with an incredible personal and professional experience. Don’t miss this opportunity and sign up for the scholarship selective process. There are more than 1500 students per year that join IBS Americas’ partner institutions in the United States and Europe. 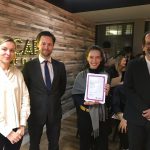 Inside Pearson College London: an interview with a former student Karina Tolardo

Check out the interview with our former student Amanda 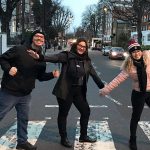